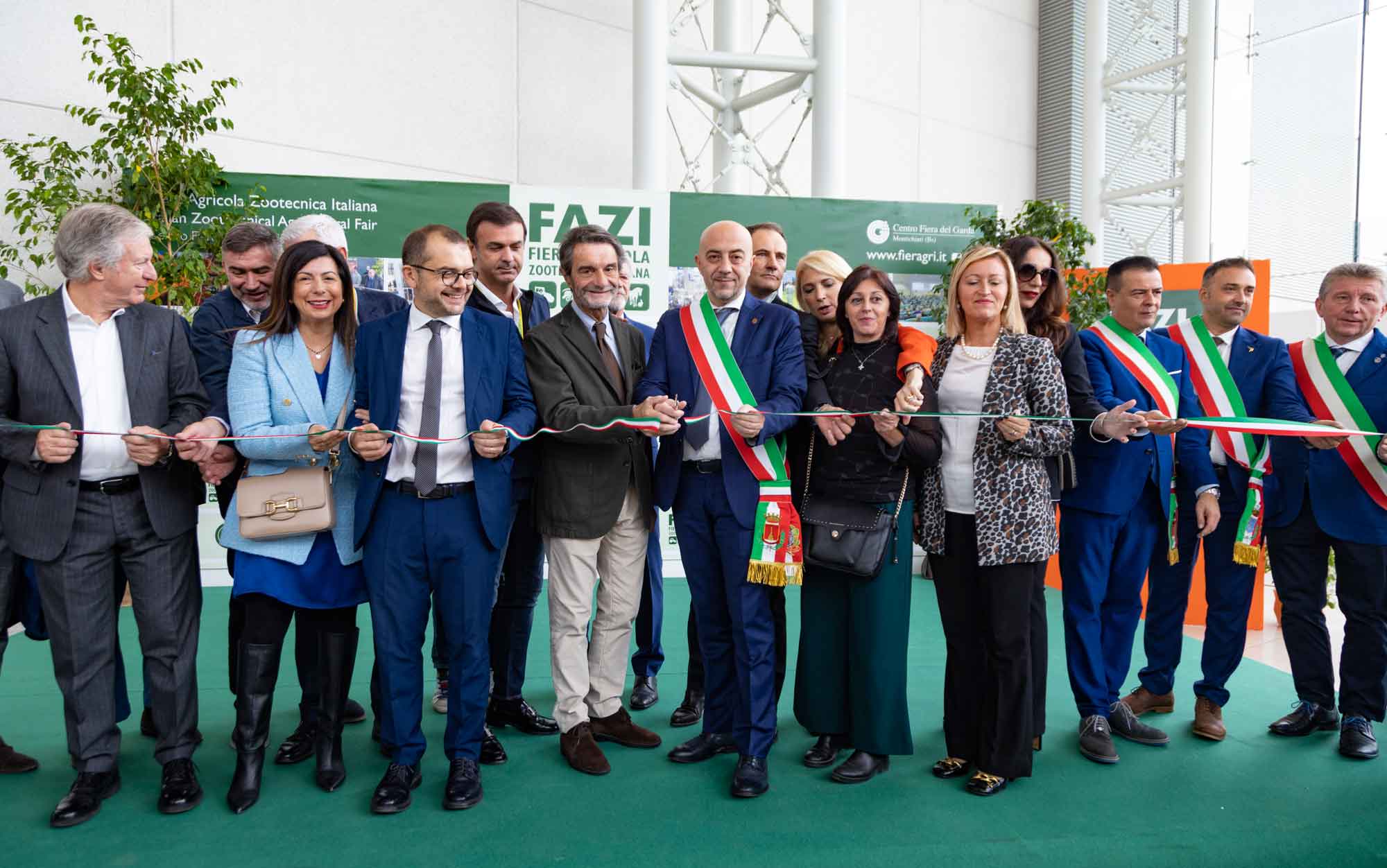 Inauguration of the 94th edition of the FAZI in Montichiari
President Fontana (Lombardy Region): a fair point of reference for the sector

The war on meat and synthetic food starts from the Italian Agricultural Zootechnical Fair (FAZI) in Montichiari, with Coldiretti leading the defense of animal husbandry as an environmentally sustainable and economically successful production model, a bastion of productive traditions and food products that have their history over the centuries (and agriculture, including its fair, in Montichiari is an example) and at the center of a production process not only of raw materials necessary for quality Made in Italy, but also strategic for a multifunctional path and energy production thanks to the use of zootechnical effluents.

This morning, the inauguration of the 94th FAZI, coordinated by the director of the Montichiari Exhibition Center Ezio Zorzi, officially kicked off a review that the president of the Lombardy Region, Attilio Fontana, accompanied by the Councilor for Agriculture Fabio Rolfi and by various directors of Pirellone, defined it as a “reference point for agriculture and animal husbandry at a national level”.

At the cutting of the ribbon, the president of the exhibition center Gianantonio Rosa focused attention on the numbers (“Over 47 thousand square meters covered, more than 400 exhibitors and a marked attention to animal husbandry with the national exhibition of the Frisona and the tunnels”), but also on the “presence of experts, authorities, representatives of the agricultural world to raise the debate and set the lines of agriculture for the future”.

The scenario is partly uncertain for agriculture, for animal husbandry (although Brescia is the first agricultural province in Italy), especially for production costs, but at the same time there is confidence that the new government – in the same minutes of the inauguration, the Executive was sworn in with Giorgia Meloni as premier and Francesco Lollobrigida as Minister of Agriculture and Food Sovereignty – can make itself heard in Europe and support agricultural businesses.

Unanimous appreciation from the agricultural world for the new government in the choice of combining the term “Agriculture” with attention to “Food sovereignty”, not to be confused with sovereignty, but with the specific purpose of reaffirming the strengths of Made agribusiness. in Italy and to accompany a growth of agricultural businesses towards the development of new technologies, cisgenesis, digitalization, without sacrificing animal husbandry, also strategic in the role of transition towards an agro-ecology in which biodiversity can swim together, attention to the soil and water resources, but also productivity.
And if hi-tech farming is to play an increasingly key role in the agriculture of tomorrow, characterized by an increase in size (with an increase in thirty years from an average size of 5.1 hectares to 11.1 hectares, according to data from the 7th Agricultural Census of Istat) and from a vocation to investments, the whole sector will have to face the challenges of sustainable production, water saving, internationalization as a solution to improve the trade balance and conquer new spaces abroad .

Themes also addressed during the conference promoted by Coldiretti on “Synthetic meat, new European threats and challenges for animal husbandry” (by the way, the director of the Grana Padano Consortium, Stefano Berni, also signed Coldiretti’s petition against synthetic food ), from which clearly emerged the role of agriculture and the attempts of delegitimization by multinationals to support an approved diet, without taste and doubtful benefit for health, so much so that President Ettore Prandini asked the European institutions from the stage to ” classify synthetic food as a pharmaceutical product, to be subjected to experimentation before putting it on the market “.

The Common Agricultural Policy is one of the unknowns of the future. The plant is broadly known, less how it will be declined, except that the environmental component will be even more decisive for obtaining resources and financing, with the risk that bureaucracy and excessively green guidelines could cost in terms of productivity and economic sustainability of the businesses. “The defense of production potential – declares the president of Confagricoltura Brescia, Giovanni Garbelli – is fundamental and must not be sacrificed”.

FAZI is a prestigious showcase of animal husbandry with the 70th National Show of the Friesian breed, which will culminate tomorrow with the final in the ring of pavilion 6.